Couscous Salad with Garbanzos and Vegetables

This salad was delicious and surprisingly filling. I expected Tim to still be starving after we ate, but he said he was full.  If Tim is full then that is a good indicator that this is a hearty meal.  The recipe says to use whatever vegetables are in season.  The original suggestion was cucumbers and tomatoes but since the tomatoes we have in the store right now are a far cry from real tomatoes I decided to go with red and green peppers.  Those worked really well and I will continue to go that route until we get some good summer tomatoes in the markets.  I felt like we were eating a light, fresh meal that reminded me Spring is on it's way despite the cold temperatures.  It was nice to have a little taste of warmer weather in our kitchen, if only for one night.
One suggestion I will make when buying ingredients for this recipe is to go to Whole Foods or another store that sells grains in bulk to buy the couscous.  It is way, way cheaper that way. 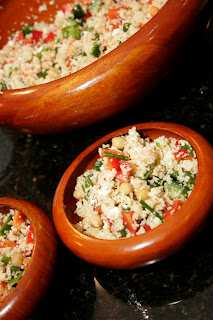 Combine couscous, boiling water, and 1 teaspoon olive oil in large bowl.  Stir with a fork and cover for five minutes.  Fluff with fork and allow to cool.
Meanwhile, for vinaigrette, combine vinegar, mustard, salt and pepper in small bowl.  Stir with fork until salt is dissolved and mustard is incorporated.  Add the olive oil and whisk until combined.  Remix before adding to salad.
Add tomatoes, cucumber, garbanzos, feta, onions, and nuts (if using) to the couscous.  Toss.  Add dressing and toss again.
Serve with hearty bread and butter.
Posted by Shawna at 3:13 PM No comments: